Today we had booked the “Go Wild Cape Tribulation Day Tour” with Jungle Tours and when Tania called yesterday to confirm, they told her our pick up time was about 7.25 AM, so we still had a little bit of time left to grab some toast at the bar of our hostel.

We were a bit worried if the driver was going to be on time, but surely that wasn’t a problem at all. Jason, our driver / guide for the day, turned up just in time and since we were the last ones to be picked up, we could drive straight to Port Douglas via the Captain Cook highway.

Our first stop today was the Wildlife Habitat Centre and this time around we could check it out ourselves. We were really looking forward to our meet and greet with one of the koalas in this sanctuary.

Tania was smart enough to buy us some pallet food for the kangaroos, while I already wandered off into the souvenir shop and while Jason told us a little bit more about the different native bird species, I was completely occupied by gazing at and trying to photograph the Southern Cassowary. What an odd animal, but dangerous nevertheless!

At 9AM it was finally going to happen, our meet and greet with a koala! First we learned a little bit more about the koala and afterwards we even get the chance to go and get a picture with it.

But before that was going to happen, Mati, the ranger of the centre, told us as well some interesting facts of the turtle and snake. We’ve got a chance to touch them and if we wanted, we also could get a picture taken with them. But it was unanimous, we all wanted a picture together with Samson, the 9 year old koala … he was just sooooooooooooo cute!

Mati tells us how to stand and hold the koala, but before we even realise that we actually hold him, he already takes him away from us … such a pity, I really wanted to hold Samson a little bit longer, but I guess we should be lucky enough that we had him in our hands for just a mere 5 to 10 seconds!

When everyone has his or her professional picture, we still have some free time of our own and we head straight towards that other cute animal, the kangaroo!

At their paddock we see lots of different kangaroos and wallabies and they are all so cute, especially the little ones. We try to feed them and although they are a little bit shy in the beginning, food does the trick and we even see a chance to stroke some of them … how cool is that!

Because there isn’t much time left, we have a quick look at the crocodile and the dozen of bird species and than we were off again to the Daintree Rainforest.

Our next stop is at the Daintree River, where we board our “cruise” for a trip along the many mangroves.  We are supposed to spot lots of crocs on this cruise, but the tide is high and although our captain is aware of all the best hiding places of Lizzie, Scarface, Dusty and Forest Gump (yes I know, who comes up with these names???), they are nowhere in sight. 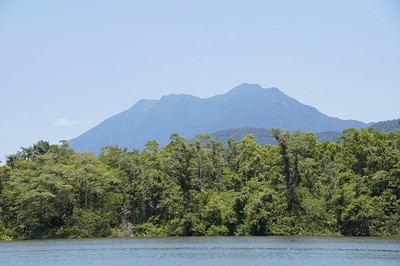 We do however have a chance to see a tree frog, which lost his way and jumped right into our boat as well as lots of jelly fish, which in turn gave our captain an excellent chance to tell more about them. Along the way, he also gives us more information about the trees and different plants.

We are almost back at the ferry crossing where Jason is waiting for us, when all of a sudden our captain notices something in the mangroves and there you have it, when you least expect it … he spotted a crocodile or at least a small one. It’s still a baby and our captain thinks it’s a descendant of Lizzie, but isn’t sure … we are just amazed to see one, how little he/she is!

Once back at the bus, Jason tells us the next stop is going to be at a local picnic area. This sounds like a great idea because I am starting to get hungry.

Like all tours even Jason brought his own food and today we are going to have a selection of cold pasta with the usual salads and some bread. Me like, I don’t need more. But when Jason tells us the old couple next door sells home made ice cream, we are all eager to give this a try as well. I go for the devil’s favourite, after all it’s all in the name! This turns out to be a creamy triple chocolate, but instead of being creamy it is a little bit frozen … ah well, one never complains about dessert!

When our stuff is packed in the trailer, we head off again towards Cape Tribulation! We are now in Cassowary territory and Jason tells us to give a shout when we see one, the chances our slim but suddenly I see something blue near the road … like I have been told, I shout CASSOWARY, but we are already further down the road when Jason has a chance to stop. Still, we are able to see this bird crossing the street and I guess we are save sitting in the bus because I really don’t want to stand face to face with such an giant animal!

We are only minutes away from Cape Tribulation, but first we have a small walk in this rainforest area called the “Dubuji” boardwalk, which is a Kuku Yalanji word. This aboriginal word means “place of spirits”. I didn’t notice the spirits though, but Jason told us a lot about the trees, plants and even a bit of the wildlife living in this area.

And finally the moment was there! When we parked our bus, we only had a short walk ahead of us before we saw the Cape. Much is said about it, but you have to see it in person to really talk about it … it is quite amazing seeing the rainforest come to the beach and we were lucky to see it with a clear blue sky. Needless to say, this was THE opportunity for us to try out some great jump pictures and still we had some time left to have a short walk along the beach as well as a moment to stand still and have a closer look at the local artwork of the sand crabs.  Talking about real artists!

But sadly enough it’s already time to drive back to Cairns. We drop off some people who stay at the Cape overnight and then it’s back on the Captain Cook highway again. After a drive of about 2 hours we are back at our hostel.

Once again we choose the backpackers meal, but this time around it is just too horrible to eat. How on earth do they manage to make food taste that bad??? This is just unbelievable! Lucky for us, they have a small convenience store … dessert anyone???

Because there was nothing else going on here, we decided to make our time useful and repacked our bags. Tania still had some internet access left, so she could skype home and even had some time to download pictures while I took a nice hot shower and discovered a few souvenirs from the Cape. It is always nice to see those giant mosquito bites … NOT!!!

It’s already after midnight when we call it a night and I fall asleep almost instantly … after all, it has been quite an interesting day!

Previous Next Table of contents

This blog requires you to be a logged in member of Travellerspoint to place comments.

If you aren't a member of Travellerspoint yet, you can join for free.